There were two of them. One blonde and the other brown. Newly born, the baby kittens and their equally tiny Mother were stranded in the middle of a rushing stream. Helpless and afraid – the earlier rains surprising her with a sudden flooding – the tiny Mama Kitty was stranded and loudly mewling now for help. I was amazed that such a loud voice could come from such a small body. Splashing through the rocks at the shoreline and fording water up to my hips, I finally reached the shivering little family. As I scooped them up one by one out of the freezing life-threatening water, I held them close to my bosom, cuddling the whole squirmy bunch warmly in my towel.

And then I woke up…

That was this morning’s dream. No doubt at all but that this was about my oldest daughter, Stephanie, and her little ones. I’ve come to know a few things over the years about dream interpretation and rushing water, generally, means emotions. Yesterday, my Stephanie was in her first car accident. As she sat at the red light waiting to turn left, a man – high on something – struck her forcefully from behind. He was going fast enough to shove her car across the entire intersection totaling her company’s vehicle in the process. She was taken by ambulance to the local Hospital Emergency Room as he was being arrested for drug intoxication. Talk about emotions with a capital ‘E!’

My daughter lives 800 miles north of me. She is 31 years, 1 month, and 5 days old. Last week… she had her very first cast removed from her very first broken arm. And now this? Oy vey! She is going to be right as rain though because Stephanie is the strongest woman I know. Despite the recent broken wing, my angel bounces. She does not break.

As for me though, I feel… Well, have you ever wanted a ‘Mulligan’? A do-over? Well I want one. I think we should just give May another go-around. So… I want a Mulligan. Moreover, I want to go see for myself that she really is okay. And a warm towel to hug them close when I get there.

I do hope the man that hit her finds a lighter path to follow.

I smile a lot. And I believe Unicorns fart rainbows. See... now you're smiling too. 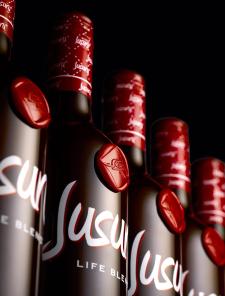 Begin From Within ... Do you want to be Healthier and Look Younger? Would you like to Touch Your Toes again? Take the 90 day challenge to see how JUSURU will change your life!